DAVENPORT – About 30 boys ages 5-16 spent time together last month going door-to-door in Bettendorf seeking donations for the Sacred Heart Clothing Center in Davenport. The youth from the Quad-Cities are members of Conquest, a Catholic boys group that is part of a national program. It offers leadership programs, groups and camps for boys. Scott Schluter, leader of the local Conquest 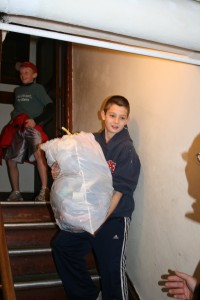 group, and the boys took informational fliers to homes Nov. 21. At the same time, they asked for donations of new or gently used winter clothing or money and offered to rake leaves for payment. The following day the boys returned to the homes to pick up donations marked for the clothing center. “Conquest trains boys to become self-disciplined and confident young men, Catholic leaders who possess moral integrity and are committed to improving the communities in which they live,” Schluter said. Conquest also offers sports programs and meets weekly in Moline, Ill., for two hours. Conquest members met in Moline on Nov. 30 and loaded vehicles with the donations they collected. They took the items to Sacred Heart Clothing Center, located in the former convent on the cathedral grounds. Sister Mary Schmidt, OSB, who runs the center, appreciated the donations. She told the youth and the adults that on average 300 families per month seek clothing and other items from the center. She said the late Msgr. Sebastian Menke opened the center when he was pastor of Sacred Heart Cathedral. Originally the center was in the church basement before moving to the convent’s basement. After learning about the history of the center, the boys and their leaders formed a line from the vehicles to the convent for the transfer of about 30 bags and boxes of clothing.

Schluter also presented cash and checks worth $333 to Sr. Schmidt and said more would be coming. Conquest leaders and youth took a tour of the center to see how the clothing was separated in the tight quarters. Various youth and adults asked Sr. Schmidt what else they could do for the center. She said they were welcome to help sort clothes, clean and do other projects. She welcomed the offer of help and future donations of clothing. Brothers Sam and Michael Perenich, members of Our Lady of Lourdes Parish in Bettendorf, participate in the Conquest group for ages 11-16. Sam said the experience at Sacred Heart was “humbling.” He was glad to see how charitable people were and felt it was satisfying to get clothes to the needy. Michael said it was fun to work with friends and know he was helping others in need. Regarding the visit to the clothing center, he said, “It was an interesting place and interesting to see how the clothes were divided between men, women and children.” The Conquest group is divided into three programs: father/son ages 5-7, Conquest junior ages 8-10 and the Conquest middle school group for ages 11-16. The year is divided into campaigns, Schluter said. Each campaign has a different virtue to focus on. The Dec. 7 meeting was the last on the virtue of kindness. In January the virtue will be learning about obedience.