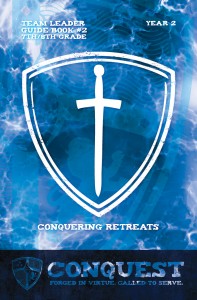 March 14, 2009. Chantilly, VA. The Conquest group at St. Timothy Parish in Chantilly, Virginia are living out their “call to serve” within their own parish. Fourteen boys from the group sacrificed their Saturday morning to help out at a parish retreat for the First Communion classes.

The retreat started with Mass, after which the boys served breakfast to the first communicants. While the children ate, the Conquest boys sat with them and talked about Jesus and the Eucharist. After breakfast, the Conquest members spread out and assisted the children with a small craft that had been prepared by the CCD staff.

Following the craft, the children prayed the Rosary, followed by a talk from one of the parish priests. At the end, the group presented a skit about St. Tarcisius and the importance of the Holy Eucharist. Three of the boys came down from the stage afterwards to ask the second-graders a few questions about the story, and helped explain it to them.

The skit was a huge hit with the children, who watched with rapt attention. One of the CCD teachers commented that she had taken a poll of her class, and the skit was their favorite part of the retreat.

“I thought the retreat was really great!” said Conquest member Ben Borneman. “We got to do a really good skit for the kids and talk to them about the Eucharist.”

Andy Miller, another of the Conquest members in attendance, added, “It was really good for the second graders, and I think they had a lot of fun.”

Maria Ho, the Director of Religious Education at St. Timothy, was very happy with the help that the Conquest boys provided for the retreat.

“We were very grateful to have the Conquest boys helping us with the First Holy Communion Retreat,” she said. “They were helpful and well organized, and I was so impressed with them! They definitely are good examples to our young second graders. The retreat was certainly enriched by having the Conquest boys there.”