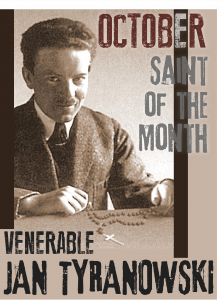 Jan was born in Poland in 1901. He loved science, studying languages & photography. Jan worked hard in school and became an accountant but soon after he became sick with a chronic stomach ailment. He left accounting and took up tailoring with his father. After this change, Jan became a much happier man. His faith also became more important and he was more involved in his parish.

One day while attending Mass, he heard a priest’s sermon that would forever change his life. The priest said that “it is not difficult to become a saint”. Jan had thought sainthood was only for priests and nuns. So he began praying every morning. He loved reading St John of the Cross and Saint Teresa of Ávila.

By 1940, due to WWII more than half the priestly population in Poland had been deported. One of the parish priests asked Jan if he would become more involved with the youth ministry in the parish. He became the youth leader at his parish, which also happened to be the parish of a young man by named Karol Wojtyla – or better known as Pope John Paul II. During the war, Jan held the youth group meetings in his apartment. It was there where he met Karol. The Gestapo once discovered their meeting but ignored it as a gathering of fanatics.

Jan had the ability to inspire young people spiritually. Karol’s dad died in 1941. and he had no immediate family so he turned to Jan for support and guidance. When Jan introduced the books of St. John of the Cross to Karol, it changed his life. They became great friends and Karol was ordained a priest in 1946. Jan died in 1947. He had lived to see his student become a priest.

Pope John Paul II credited Jan with helping him recognize his vocation. St John Paul wrote of his mentor: “He was one of those unknown saints, hidden amid the others like a marvelous light at the bottom of life, at a depth where night usually reigns. In his words, in his spirituality and in the example of a life given to God alone, he represented a new world that I did not yet know. I saw the beauty of a soul opened up by grace.” Pope John Paul II declared Jan Servant of God in 1997 and Pope Francis declared him venerable in 2017.