July 30, 2008. Sydney, Australia. “It was an incredible experience. I’d never seen anything like it or been part of anything like it,” said Nick Lulli, 18, a Conquest youth who volunteered his help for the ECYD Convention leading up to World Youth Day in Sydney. He was talking about the experience of promoting the sacrament of Confession at Randwick Raceway in Sydney before and after the Vigil on Saturday, July 19.

“You would see people come in, you’d spend 3 to 5 minutes just talking to one person about why they should go to confession. They’d be kind of reluctant at first, but then they’d come out crying and thanking you. Then they would help you promote confession.”

During the course of the “Confessions marathon”, Fr. Michael Sliney, LC and the other priests heard close to 1,000 confessions in total.

For Fr. Michael, World Youth Days are magnificent opportunities to “set up shop,” as he calls it. The shop is simple. It’s a little stool. When he sits down and puts on his purple stole, the stool becomes a makeshift confessional, the line begins to form, and sacramental grace begins to flow.

On occasions like World Youth Days, he and his fellow priests are accustomed to sitting for hours to hear confessions, keenly aware that this is a special moment of grace for the souls, an opportunity that must not be wasted.

This time, Fr. Michael had a few “business partners” to help him recruit for the “shop”- 41 Conquest boys, to be exact. It wasn’t long before the line of penitents became impossibly long. Meanwhile, a diocesan priest noticed and set up his own “shop”, asking the boys to recruit for him as well. Moved by their example, several other priests joined them, until there were about 7 priests hearing confessions all in the same area – and this was in addition to the official confessions area near the adoration chapel, which was rather far away from the heart of the action. This confessions zone was in a highly trafficked area with plenty of passers-by and sufficient visibility to attract interest.

Before long, the international clientele of penitents required knowledge of more languages. Fr. Michael Sliney could handle English, Spanish, Italian, and French. But the souls also required Chinese, German, Portuguese, Arabic, Polish, and Russian. So the boys took it upon themselves to recruit more multilingual priests so that no one would have to go without the sacrament of Confession.

The “shop” was in operation from 2:30 to 6:30 p.m. with a pause for the Pope’s arrival. After Pope Benedict left, Fr. Michael and the other priests set up shop again, and continued hearing confessions from 10:30 p.m. to 2:30 in the morning. At 2:30 a.m., Fr. Michael had to leave, but a diocesan priest came over and offered to take his place, remaining another hour.

During this time, the boys promoted confessions nonstop. Some were so energized by the experience that they forgot to eat. Nicholas Dodson, 13, a Conquest member from Raleigh, NC was so busy finding penitents and taking care of the priests-finding food for them, hunting down a sweater for a diocesan priest as the evening got chilly-that he didn’t have dinner till late at night. He was putting the needs of the souls ahead of his own.

The experience of inviting people to go to Confession was a powerful one for the boys. What was so deeply satisfying was the realization that they were reaching people who ordinarily didn’t care about Confession, or who hadn’t been to the sacrament in years. They were making a profound difference because their outreach was touching all kinds of people, including those on the margins of the Catholic faith. “If you hadn’t offered, I’m not sure I would have gone,” said one woman, between tears. She was crying for joy.

“It was often difficult to persuade penitents to attend, or to get any positive reaction at all out of the apathetic passersby. But so frequently our young men were presented with tangible and profound proof of the importance of their sacrifice: the beautiful testimonies of the penitents,” said Nick Lulli. His account of their experiences continues:

“A number of the most reluctant penitents provided the most heart-wrenching testimony. After several minutes of relentless conversation, and in a few cases nearly half an hour, many prospective recipients of the sacrament entered the line and began preparing their confession. Their tearful expressions of gratitude were what inspired us to stay the course and remain steadfast. Countless newly-cleansed souls wept tears of joy while they thanked us profusely for convincing them to overcome their fears and doubts, and to return to the sacrament. Many of these same people, initially the most resistant or unlikely of candidates, promoted confessions with us after their encounter with Christ in Confession for up to hours at a time.

“One moment you would see a friend earnestly in conversation with a skeptic pilgrim, the next you would see that same pilgrim in the confessional, weeping along with the priest. It was common to hear a man exclaim to us, ‘Thank you so much for making me go to Confession, I haven’t gone since primary school.’ Or even further, ‘I’ve never gone to Confession before. Thank you all so much for your witness.’ Those that experienced these conversions through Confession but did not promote with us afterward for an extended period of time would nearly always persuade their tepid friends to take the plunge into the fountain of grace that they had found so refreshing. Men and women thanked us for our physical testimony, calling it ‘inspirational’ and ‘magnificent.’ 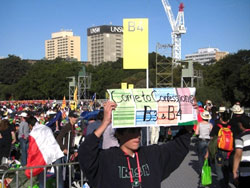 “Some of the more wizened members of the event told us that we changed their perspective on our generation. I had never seen anything like it. Hardly any guys tired of their arduous task, many remaining at their posts for the entire duration of the apostolate. People would pass by once, and then hours later, and see the same motivated young men, doing the same thing. One guy told me the story of a short conversation that captured the mood of the group and the aura of exuberant tenacity that permeated our entire section throughout our pilgrimage, but especially during this apostolic endeavor:

“A woman, after passing him in the early afternoon, saw him again, his voice a little the worse for wear, still exclaiming proudly, “Confessions, right this way!” She inquired incredulously, “Are you guys still out here? I can’t believe it. Don’t you get tired just standing out here in the cold? Wouldn’t you rather just walk around and have some fun? Doesn’t it get boring? Why do you do this?” To which our well-formed young man answered, “Yeah. It’s exhausting, but we do it for Christ”. This simple yet profound response stopped her dead in her tracks and changed her whole outlook on Confession. We cannot know the extent to which we affected those we came into contact with during our ministry, but one can certainly make an informed assumption based on the reactions and testimonies of those that did open their hearts to us.

“I have attended many trips sponsored by the Legionaries, frequently with Fr. Michael, but never before have I seen such stunning evidence of the return on an investment of sacrifice,” he said.

Fr. Michael Sliney commented that the boys rose to the occasion and took the sacrifices in stride without complaining. “The trip to Australia was a financial sacrifice for a lot of our kids, and it was also a physical sacrifice sleeping on the ground and promoting confessions all night. But none of the kids complained. They were happy to go through a little adversity for Christ.”

“These are quality guys,” reported another Conquest participant. “They were the only ones out there promoting confessions. Imagine what WOULDN´T have happened if they and Father Michael hadn´t have been there! This has been a very good experience.”