“I loved it!!   Nobody was mean to us!  We received a lot of positive responses.” 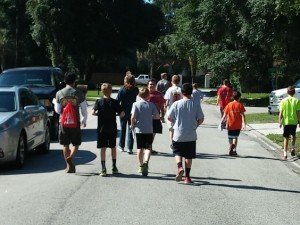 This was the feedback from the high school seniors Tim Truss, Jonah Wilamowski and
Chris Buser, who led the Jacksonville Conquest group during their door-to-door mission
apostolic service project last month.

Boys in grade 5-7, organized into teams of 3, stepped far out of their comfort zone, overcame
their fears and, with great courage, knocked on doors to speak out about our Lord Jesus Christ.

The mission goal on that Saturday in May was to reach out to the families surrounding the local St. Joseph’s parish, invite them to Mass, ask for prayer requests and share the news about the new pastor, Father Thanh.  The boys had a copy of this weekend’s bulletin to hand out that contained Mass times and other information regarding ministries and activities at St Joseph’s.

A few minutes into the adventure, missionary Dominic D’Amico said, “I was very nervous before we started, but I’m not anymore because nobody is answering the door.”  Shortly afterwards, many doors started opening, and a confident Dominic fearlessly spoke to those he met.

The excitement from the boys walking through several neighborhoods was contagious and
helped them continue as the Florida sun rose high in the sky.  Another obstacle presented
itself as the boys were greeted at one house by a snake sunbathing on the path to the front
door.  The boys safely maneuvered around the “obstacle” and were able to speak with the
young woman who lived there.

They learned she had just graduated from the University of North Florida.  The boys invited her to Mass, gave her a bulletin and wrote down a prayer request to help her find employment.

At another home, the owner asked the boys if they would be attending Mass on Sunday as well. They said yes, and he answered, “Well, I’ll be there too!”

During another conversation, one of the men they visited gave a prayer intention for his niece
who had applied for a teaching position at St Joseph’s school — the same school where many
of the boys attend!  (Since then, parishioners at St Joseph said she did get the job!  Prayers
answered!  Praise God!)

Missionary Luke Butler said he loved talking with the people, saying most were very warm and receptive to the boys, happily giving prayer requests, and even those who were not Catholic were very pleased and thankful to see them inviting others to learn about God.

The boys finished the mission in time for lunch where they enjoyed pizza and shared stories.

For more information on Holy Week Missions projects, visit www.missionyouthmissions.orgLuke said, “We need to go to more neighborhoods!  Or maybe go to nursing homes and play bingo with the residents!”  Andy Truss said, “My favorite part of the day is how we would take turns speaking, handing out the bulletins and writing down the prayer requests.”  Aaron Upchurch said he enjoyed when the “folks actually looked at the bulletin after we handed it to them!”  Mikey Truss said, “Jesus sent the apostles out 2 by 2, but we went out 3 by 3!”