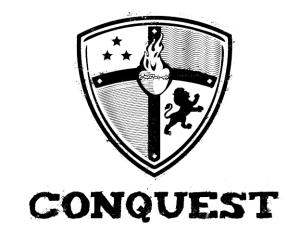 There is a beautiful harmony to God´s Providence, wherein your boys used their legs (by climbing) to provide for a man who couldn´t use his own.”

Jay Dardis, who leads the Baton Rouge, Louisiana, Conquest group, said a local representative from Catholic Charities, Kayla Moscona, said this to him after his Conquest members raised $1,600 in a “Climbathon” event to purchase a wheelchair for Mr. Saw Noung Than. Mr. Than, who is from Burma, suffers from paralysis on his left side, and needs a wheelchair for mobility.

Among other activities at an overnight event at a local Laser Tag facility, the Conquest members completed a quota of climbs on a rock-climbing wall for pledges made toward the purchase of the wheelchair.

One of the parents who served as a chaperone said, “This is what I was thinking at 2:30 am. They were a little delirious, but were bonking each other with the dodge balls and laughing constantly. What great memories they will have of how much fun you can have helping out someone else.”

Mr. Than joined the Conquest members to receive his new wheelchair at the same facility where they held the Climb-a-thon. His Catholic Charities case worker translated Mr. Than´s words to them.

“He was all smiles as he tried it out for the first time,” said Jay. “Now he can get around his house (and beyond) without any help, and he´s thrilled.”

Jay said the wheelchair cost a bit more than the group expected. “But in God´s surprising ways we were able to afford it due to an additional donation from an anonymous Catholic Charities donor.”

Check out the group’s Facebook page for more photos of the event.