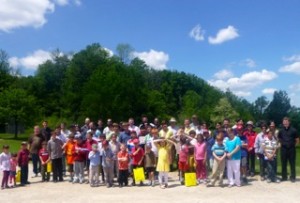 What is it about the Conquest weekend at Camp Brebeuf that continues to draw more and more boys every year?

Is it the wild abandon and exhilaration offered by bush games like “Capture the Flag? Is it the knee-knocking challenge of the high ropes, or the true grit required to complete the rock climb? Or could it be the simple, basic pleasure of roasting marshmallows over the glowing coals of a pit fire nestled deep in the thick, dark forest which, as Gordon Lightfoot put it, is too silent to be real?

I believe it is all of these and much more. Once again, under the leadership of Carl Pinto, who, over the years, has perfected the Camp Brebeuf weekend into an art, and Marvin Duarte, Director of Milton’s Conquest group, boys from the Milton and Pickering groups lived their faith in nature, far from the confusing and misleading racket of television and the internet.

Leading the spiritual component of the weekend were Father Thomas Murphy L.C. and Brother Nathan, both of whom gave their last ounce of energy to assure that the boys would come out of this weekend much more vibrant in their Catholic faith formation, and spiritual growth, well on their way to becoming strong Catholic men. 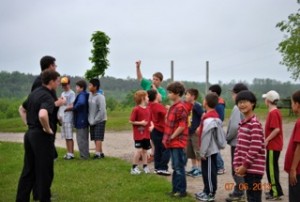 The only sound was Father Murphy’s voice, and the snapping and crackling of the wood in the stove. All eyes were glued on this dedicated priest as he guided the boys’ imaginations down the demanding path of sainthood, and its meaning for all of us. What he gave the boys were true role models for survival in a distracting, secular world.I recall one special moment as we sat around the woodstove in the log cabin chapel as Father Murphy told the boys stories about the lives of the saints. Here we were in a camp named after a Canadian Jesuit martyr in the year of a new Jesuit pope. Could it get any more relevant than that?

Another memorable time was the Rosary being recited by the God Squad around the roaring pit fire after all the younger boys had left to prepare for lights out. I was impressed by the boys’ concentration and focus on the mysteries and by their devotion to Mary. The chanting of the prayers seemed to bounce off the maples and head up through the opening in the canopy along with the sparks, and on out into the dark ceiling covered in pinpoints of light. It truly was a very special time for us all.

On another occasion, the boys presented skits on the elevated stage in front of the fire pit. The orange flames flickering in the night provided excellent lighting, and added to the drama of the presentations. In one skit, we got to meet a fickle Pontius Pilate, and a rather despicable Barabbas, and the boys got to witness firsthand the injustice and cruelty of the whole scene, and got to experience it up close. In another, we saw the Good Samaritan do what all Christians are called to do, even though others have failed, and it is much easier to pass by. The magic of this occasion was watching the Bible come to life, and seeing the excitement and focus of the young boys who looked up to their older peers with admiration, and an obvious ambition to be part of future skits at Camp Brebeuf. 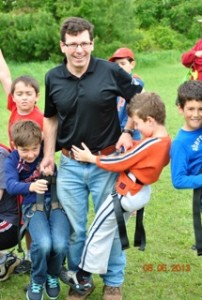 Saturday morning, as my eight-year-old grandson climbed the tall hydro pole, I checked in with Saint Michael asking him to guide the little fellow as far as he wished to go. When he reached the top, and it was time to cross the horizontal ladder, he began to shake, and asked to be lowered, and as he stood on the solid earth, people were telling him that he had done well and had improved a lot since last year. His father consoled him, and I could tell that he would be stronger for this experience, and that he was determined to better it next time around. I told him later that St. Michael had been there beside him, and that seemed to add extra comfort and solace, and lighten the load.

I would think that everyone at the camp experienced their own set of magical moments, and I do not know what they are; however, I am certain that Jesus witnessed them all, and that he was happy with them, and he saw that it was good.

For what on earth can compare with boys bonding with each other and with their fathers, praying the Rosary together, attending mass in the Pine Cathedral, learning to appreciate and give thanks for the food they receive, and growing side by side in their Catholic faith?

I guess the overriding question is what on earth can compare with a camp which leads boys on the long road to manhood, sainthood and beyond?