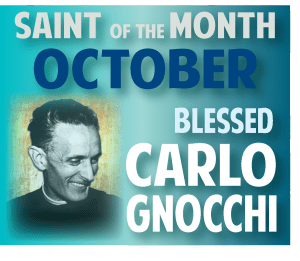 Blessed Carlo Gnocchi was born in 1902 in Italy. When he was only 5 years old, his father passed away and his family moved to live with relatives. Within a few years, both of his brothers died from tuberculosis. He grew up with his mother in a devout Catholic home. Early in his youth, he decided he wanted to be a priest and was ordained when he was 23 years old. Gnocchi’s focus, since the first years of his priesthood, was the upbringing and education of the youth in his parish. He worked as a chaplain in many Catholic schools. During World War II, he was a military chaplain and sent to Greece. His troop was then sent to Russia, where he almost died from the cold and frostbite that took the lives of many service men there. As a survivor, when he returned to Itlay, he took it upon himself to visit each of the families of the deceased to tell them the final words of their family members. He strove to ease the wounds of suffering and misery created by the war. He helped Jews flee to Switzerland and wrote many articles against the occupying forces. He was imprisoned more than once for doing so but was released. After the war, Fr Carlo felt called to help the youngest people affected by the war – orphans, wounded, handicapped and sick children. He started homes and a vast network of schools and organizations across Italy to take care of these children. He spent the rest of his life making sure these organizations helped the youth and he died in 1956 when he was 53 years old from cancer. His funeral was attended by thousands of children from the schools and homes he opened. Many miracles have been attributed to Fr Carlo. He was beatified in 2009.