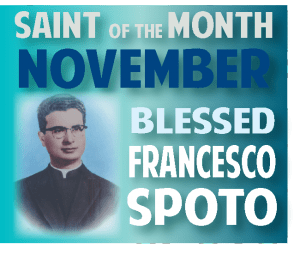 Blessed Francesco Spoto knew the value of life, and how to give it up for others. He was born in Italy in 1924. He studied in a catholic school and was ordained a priest in 1951. He was a man of character and attached to his duties, a serious student, obedient and tenacious religious person, zealous and serving priest. Within only eight years, he was promoted to Superior General of the Congregation when he was only 40 years old. In 1964, he went to the Democratic Republic of the Congo to visit the missions and priests that were under his care there. It was a time when Congo was in civil war and Fr Francesco knew the risk of going there but he had to see the priests who had been sent there on missions. He was captured by Simba tribe for being a priest and beaten almost to death. He escaped, and died two weeks later, having lived long enough to declare his forgiveness for the captors who had caused his slow, painful death.  Pope Benedict declared him a martyr and blessed.

Cardinal De Giorgi said in his homily that Father Spoto was “savagely hit on his chest on Dec. 11” by the Congolese rebels. “He grasped on to life for 16 days of extreme agony, forgiving his killers,” the prelate added. According to the cardinal, Father Spoto “abandoned himself to the will of the Lord, without reservations.” Cardinal De Giorgi added that the martyr “invites us to holiness, not necessarily accomplishing extraordinary acts, but doing the everyday things.”

He “gave a boost to the congregation, dedicating himself to vocations, to opening new homes and sending the first brothers in mission to Biringi, in Congo,” said Father Civiletto. He continued: “To visit and encourage them, during the summer of 1964, he left for Congo, where a bloody civil war was taking place.” For them, he accepted the sacrifice of his life that the Lord asked of him. “Taken and savagely beaten by the Simba, after a few days he died in the bush on Dec. 27, 1964, offering his life for the salvation of his brothers.”

Father Civiletto added that the Father Spoto was a “man of character and attached to his duties, a seminarian and serious student, obedient and tenacious religious person, zealous and serving priest, a superior general interested in the happenings of the Church and the congregation.” “During the last four months he was an aware and generous missionary to Biringi,” added Father Civiletto. The superior general said that Father Spoto is “an example of how to give meaning to life; giving it worth and giving it up for others.”  He added that “this translates into living — even in the midst of difficulties and contrasts — with joy, the joy that for us Christians comes from the knowledge of being in communion with Christ, of being a sacrifice in the hands of God. This is worthy. “This is what the Lord needs,” said Father Civiletto. “This is what the world needs.”