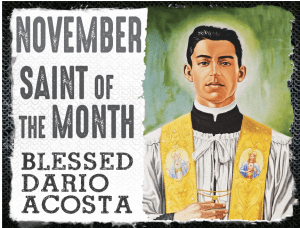 Acosta Zurita was born in Mexico in 1908 to a religious family of five children. His father died when he was young so he worked for many years supporting his family.  He decided to be a priest when he was young and he had a great love for sports. He entered the seminary and was known as the athletic seminarian, especially in soccer. Bishop Saint Rafael Guízar Valencia ordained him a priest  in 1931. HE worked in Veracruz and loved teaching children. He was known as a gentle, kind and charitable man. Three months after he became a priest, Father Zurita had just baptized a child in and entered into the church where he was about to start a catechism class for children. Two armed gunman stormed the cathedral and shot all the priests present in the name of the Mexican government’s Tejada law, which made it illegal to teach or practice religion.  Fr Zurita fell to the ground and exclaimed “Jesus!” before he died. He was a martyr of the Mexican Revolution and died when he was only 22 years old.  Pope Benedict the XVI declared him a martyr and saint in 2005.