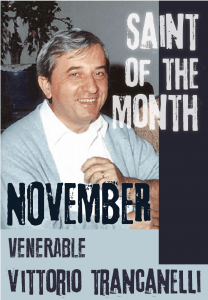 Vittorio Trancanelli was born in 1944 in Italy. He grew up in a Catholic home and decided at a young age to become a doctor.  He studied assiduously and he started his medical career at a hospital in the little town of  Perugia.  In 1965, he married Rosalia Sabatini. They had a wonderful marriage and God blessed them with two children. Throughout his life, Vittorio suffered with a rare illness called peritonitis which was painful.  Regardless, he worked tirelessly as a doctor in Perugia helping all those who were sick and came to him.  His deep faith in God was a crucial factor in his medical career. He worked with the disabled and welcomed them into his home. Vittorio and his wife adopted 7 children.  He was dubbed “The Saint of the Operating Room”. He died in 1998. He left behind him a wide reputation for holiness that he dispensed in every area of his life, from the activity in the hospital to the reception of women and children in need. Pope Francis titled him as Venerable after confirming his heroic virtue in 2017.