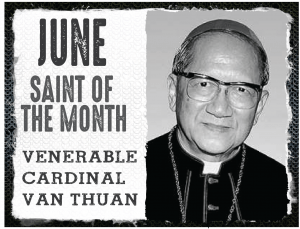 Francis Xavier Nguyen Van Thuan was born in 1928 in Vietnam. He was the eldest of 8 children  and part of  a family with a long Catholic tradition, his relatives were among the martyrs in Vietnam in the 1600s. Thuan was brought up in a Catholic environment with deep faith, owing much to his exemplary holy mother, Elizabeth. Every evening she told her son stories from the Bible and those of the martyrs of Vietnam, especially of his ancestors. She introduced him to the example of St. Thérèse of Lisieux. Thuan decided to become a priest early on in his life and was ordained a priest in 1953.  He worked in different parishes, the hospital and local prisons. He was sent to Rome to study Church teaching and graduated with a Doctorate degree. When he returned to Vietnam he taught at university level and was then was appointed bishop by the Pope. As a Bishop he really built up the parishes and church before the persecution that was to come. He developed youth associations, parish councils and made the lay people take an active role in the Church. He started a Catholic radio station and helped settle refugees.  During bishop meetings in Rome, he met Pope John Paul II when he was not yet Pope. He learned a lot from him about how to live in an area under the communist regime. The communist regime in Vietnam did not like Bishop Van Thuan’s active Catholic approach so without a trial he was arrested and imprisoned for more than 13 years in North Vietnam. Nine of those years were in solitary confinement.  In prison, he smuggled out messages to his people on scraps of paper. These brief reflections, copied by hand and circulated within the Vietnamese community, have been printed in the book, “The Road of Hope”. After being released from prison, he was not allowed to practice ministry in Vietnam but he was allowed to travel to Rome. On one of his trips to Rome, he was not allowed to enter back into Vietnam so he spent the rest of his life stationed in Rome but traveling around raising money and support for the Church in Vietnam, including seminarians and charitable organizations.  He was named a Cardinal in 2001. As a result of his imprisonment, he had a number of illnesses and surgeries. In 2002,  he passed away as a result of cancer  in Rome.  Pope Francis named him Venerable in 2017.