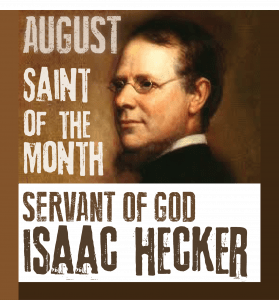 Isaac Thomas Hecker was born in 1819 in New York City. His parents were German immigrants and protestant. When he was barely twelve years of age, he had to go to work, and pushed a baker’s cart for his elder brothers, who had a bakery in New York. He studied at every possible opportunity and was an avid reader.  Isaac was deeply religious, a characteristic for which he gave much credit to his prayerful mother.  When he was 23 years old,  Isaac was baptized into the Roman Catholic Church. One year later he entered the seminary in Belgium with a desire to become a priest. He was ordained a priest in London and he spent a year as a parish priest and chaplain in England. He returned to New York in 1851 and worked for years as a Redemptorist missionary.  Fr. Hecker went to Rome to get permission from his order to open a seminary in the US.  Instead of getting permission, he ended up meeting with the Pope who agreed with Hecker’s idea of starting another order of priests in the US.  Hecker returned to America from Rome and gathered his American friends who wanted to join the order.  The Archbishop of New York welcomed them and the five men decided on calling themselves the ‘Missionary Priests of St. Paul the Apostle.’  The Priests, popularly known as the Paulists, conducted parish missions and retreats to Catholics and non-Catholics.  Father Hecker sought to evangelize Americans using the popular means of his day, primarily preaching, the public lecture circuit and the printing press. Hecker believed that the Catholic faith and American culture were not opposed, but could be reconciled.  The ideas of individual freedom, community, service, and authority were fundamental to Hecker when conceiving of how the Paulists were to be governed and administered.  He traveled across the country offering retreats and conferences. During one tour he traveled more than 4500 miles and spoke to over 30,000 people.  In 1865 Fr. Hecker started the Catholic World monthly magazine and Young Catholic, a magazine for boys and girls.  When he was 55 years old, he was diagnosed with leukemia.  There was no effective treatment for that type of cancer in the 1800s even though Fr. Hecker looked for remedies.  He worked for 13 more years evangelizing and fighting cancer.  He died in 1888 in New York. Fr. Hecker is now declared a Servant of God by the Church.