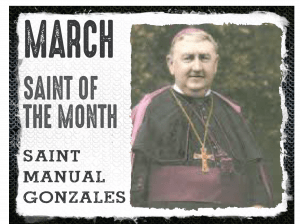 Manual Gonzales was born in Spain in 1877 to a Catholic family with five boys. He was active in his parish and from the time he was young decided he wanted to be a priest.  He was a very good student and went on to excel in university as well.  While he was in the seminary he worked at the newspaper to help make money to pay for his studies. He became a priest in 1901.  He worked as a parish priest in a few local parishes and as the chaplain as a nursing home. He had a great devotion to Eucharist and pledge devotion to spend his life spreading that love for the Eucharist.  He eventually became known as the “Bishop of the Tabernacle” because he was a man of prayer. He worked always with the poor and helped promote schools and education in the places he was stationed. He looked out for child workers and provided food for them. He had much personal discipline, organization and self control. He was able to do a lot of God because he really challenged himself.  In 1910 he founded a group called the Disciples of Saint John, who were to be devoted to the Eucharist. He became bishop in 1915. He worked helping those in need, spreading love the for Eucharist and he fell ill in 1939 and died in 1940 in Madrid. He was canonized a saint in 2016 by Pope Francis.