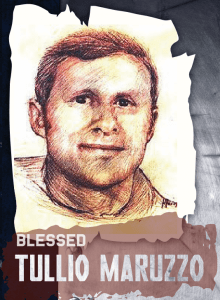 Marcello Maruzzo was born in 1929 in Italy. He was one of eight siblings and had a twin brother named Daniel. His mother died when they were young and both twin brothers joined the Franciscans shortly after as brothers and then priests. Both he and his brother left Italy to do missionary work in Central America. Marcello was sent to Guatemala where he joined a catechist named Luis Navarro. He learned Spanish quickly and then began to help the communities and administer the sacraments. He moved from village to village where he worked with the local Caritas distributing needed items to the poor. He evangelized the message of the Gospel to them and was known for being a friend to the poor and the homeless. He received threats from the militia men telling him to stop his work. They did not want him teaching the faith or helping the poor.  At the end of an intense day of apostolic work, Father Tullio decided to fulfil his last commitment by leading a catechism lesson.  Luis went with him to help. On the way back, their car was ambushed by gunpoint and they were shot and killed, and abandoned at the side of the road. Fr Tullio was declared blessed and a martyr for his faith in 2018.