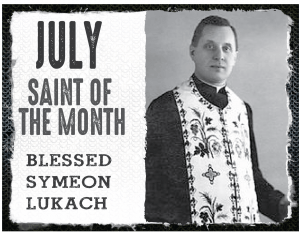 Symeon Lukach was born in 1893 in the Ukraine. His parents were Greek Catholics and farmers. He decided when he was young to enter the seminary to become a priest. He was ordained a priest and spent the first part of his life teaching. He was ordained a bishop  and shortly after was arrested by the Soviet police  in 1949 and deported to Siberia for ten years of hard labor, because he was a Catholic leader. After 5 years, he was released and worked as an underground member of the clergy. In 1962, he was arrested again for underground Catholic activity and sentenced to five more years of hard labor at the age of 69 years old. While he was in prison, he developed tuberculosis and he died in 1964.  Pope John Paul II declared him blessed and martyr  in 2001.