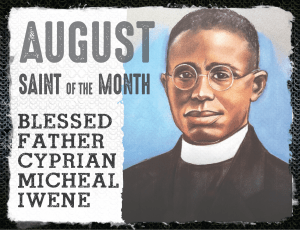 Iwene was born  in Nigeria, Africa, in 1903. His parents were not Christians, but they sent him to a school run by Catholic missionaries. It was at school that he learned about Jesus and decided to become a Christian. He was baptized and took the Christian name Micheal. He decided to become a teacher and work for the same group of Catholic missionaries where he learned. He taught for several years as a teach, then became a principal. Although he was happy teaching children, he wanted to do more to help bring people closer to God. So he decided to become a priest in 1937. He working in several villages in parishes and often traveled long distances on foot or bike to see the poor, lonely or sick.  After a few years, Micheal felt like God was calling him to be a man of prayer. He went to his local bishop and was sincere about the calling he felt, so Micheal then went to England and joined an order of Trappist monks. His goal was to learn the ways so he could open a Trappist monastery in Nigeria. It was there he became known as Fr Cyprian. He lived a life of prayer and died in 1964. He was declared Blessed by Pope John Paul II in 1998 because he was a man of prayer and who served others with love and sincerity his whole life.