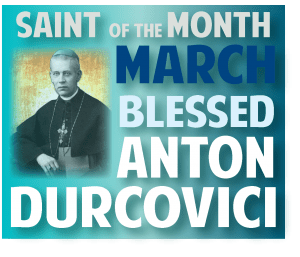 Blessed Anton Durcovici was born in 1888 in Austria. He moved to Romania with his mother and brother after his father’s death when he was young. When he finished school, he joined the seminary because he felt called to be a priest. Once he was ordained a priest, he worked as a school teacher and in charge of a parish. After WWI began, he was sent to an internment camp for simply being an Austrian citizen but he was freed on the King’s request. Later he became in charge of the seminary and then became Bishop. He was a true adversary of the post WWII Communist Party who tried to influence him to not listen to the Pope and  teach the Catholics in the diocese their communist teaching. He was placed under surveillance and  arrested by the Communists in 1949. He was held in prison together with other priests and was the target of torture and deprivations. Many times he was stripped naked, exposed to the winter weather, and denied food and water. He died in 1951 as a result of the treatment. He was buried in an unmarked grave. Communist authorities subsequently attempted to erase all evidence of his stay in prison, and most documents were destroyed. In 2013, Pope Francis declared Anton Durcovici a Martyr of the faith and he was beatified in May 2014.