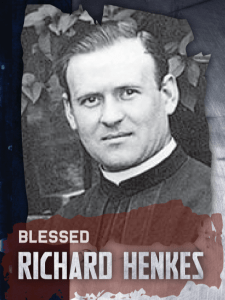 Richard was born in 1900 In Germany to a family of eight children.  His father was a stone mason and his mother was a very religious and dedicated mother. A missionary priest visited his hometown and parish, giving his testimony. This moved Richard to want the same with his life. He entered an order of missionary priests soon after completing his studies and was ordained a priest when he was 25 years old. He was best known for his great talent as a teacher and a preacher. Richard was known for condemning the ideology and actions of the Nazis, especially the murder of people considered an unproductive burden on society. He was arrested for his preaching but was just warned and released. Father Richard became an indirect collaborator with the Resistance, and spoke so forcefully and so often against the Nazis that people worried for him. He was arrested again in 1943 for making political statements, and was sent to the Dachau concentration camp where he was forced to do manual labor for the Nazis. He remained there for the rest of his life. During his time there he learned to speak Czech so he could give the sacraments and preach to the prisoners. When typhoid broke out in the camp, Father Richard volunteer to minister to the sick until he contracted the illness himself. He died there when he was 45 years old.  He was declared blessed by Pope Francis and a martyr for his faith in 2018.