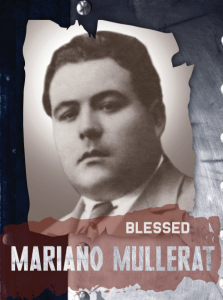 Mariano Mullerat was born in 1897 in Spain. He had seven brothers and sisters. His parents were devoted Catholics, but his mother died during his childhood. He was sent away for his education at a Catholic school and then went onto university in Barcelona. He graduated with a degree in medicine when he was only 24 years old and soon after married Dolores. He had a happy marriage with his wife and God blessed them with five children.  He dedicated his medical work and practice to help those who were in need. He founded a local newspaper and often wrote editorials about political issues. He was a staunch Catholic traditionalist who resisted liberalist interpretations of Catholic dogma. He later became mayor of the city of Arbeca and served in that position for two terms. With the change of politics and government in Spain, he was concerned and outraged to see the persecution of priests and religious nuns and brothers. He spoke out against his concerns. In 1936, militia men came to his home one early morning and took him away where he was executed by the militia for speaking out in defense of his faith. He encouraged those who were with him to have courage and have faith in God asking that their executioners be forgiven. He died shortly after. Pope Francis declared that he was killed in hatred of his faith and he was declared blessed in 2019.