What is Conquest & Challenge?

– Conquest and Challenge are ECYD Programs for boys and girls in K – 12th grade that form adolescents as Christian leaders to transform culture.

– We do this through a unique method:  virtue-based curriculum, teen led, gender specific, team based, service driven, and through responding to the needs of the adolescent.

– We offer curriculum, products and resources, training and support, and access to an international network of ECYD camps, retreats and mentors.

– We strive to aid families, parishes and schools in the evangelization and Christian formation of adolescents.

Conquest & Challenge are proven to be a successful youth ministry option for the past 15 years in the US and Canada. They are currently present in over 250 parishes & schools with over 6,500 youth every week, led by 300 adult leaders and 700 teen leaders. Offering over 45 summer camps with 2,000 campers every year.

Challenge and Conquest are ECYD Programs that form adolescents as Christian leaders to transform culture.

THE CHURCH & THE POPE

as a son & daughter

with real and genuine charity and respect

Having trouble listening to the audio? Download it here.

As a boy, Brian loved to play sports and spend time outdoors exploring nature; he enjoyed family gatherings, especially trips to the Adirondack Mountains. His many friendships were an important part of his life. When he was twelve he decided to attend a minor seminary of the Legionaries of Christ in Center Harbor, New Hampshire. In his application letter Brian wrote, “I am not sure that God is calling me to be a priest, but I want to be with boys who are searching for God’s plan for their lives.”

Brian was very happy and energetic, enthusiastically fulfilling his responsibilities and loved the school. He learned to deal with his impatience, pride and other vices in this atmosphere. He had a great love and respect for his superiors who were guiding him along the path to holiness. He made many friends among his fellow schoolmates, and he discovered one very special friend, Jesus Christ. This friendship became the focal point of Brian’s life.

Brian completed High school at the age of 16. With the help of his superiors, he discerned that God was calling him to the lay vocation in which he could help boys and young men to develop into young Catholic leaders who would bring Christ to the modern world. When he returned home he met with his friends that he had left a few years prior, and realized that many had succumb to the secular enticements of the world. He wanted more than anything to share his joy in what he had found; a personal friendship with Christ. His upmost desire was for them to receive the gift of faith formation that he had received in the minor seminary. He began getting them together to play sports, a common thread and activity that all enjoyed. He introduced them to Gospel reflections and to his friend Jesus Christ and the first youth program was born. He volunteered to work with a priest who was serving in Syracuse. He started four youth programs, developed a team of businessmen to support his efforts, and identified a major sports facility that could host the youth programs. After two years, at age 19, he decided to return home to work on the family farm while continuing his apostolate.

However, God had a different plan for Brian. The day he was to start work, May 1, 1996, he had exploratory surgery to find the cause of continuous sinus infections and severe headaches. The surgery revealed a tumor in his sinuses. This was the beginning of his two-year struggle with cancer.

After major surgery for his sinus tumor, the doctor informed him of the very serious pain he would be undergoing during the operation. “If the pain gets too great, you just push this button here for an injection of morphine, which will help.”

“I want it removed”, said Brian.

“No, Brian, you see, you don’t understand. You are about to experience more pain than you have in your entire life. We’ll just leave it there… just in case.”

“No, doctor, you see, you don’t understand: in my condition, I can no longer work for the boys the way I used to be able to; this is all I have to offer up for them; and you’re not going to take it away from me. I want it removed.”

Throughout his illness he continued to develop a plan to establish boys’ youth programs called “Conquest” that would bring together fun and formation and bring youth closer to his friend Jesus Christ. He encountered many frustrations in his early efforts, but through them he became convinced that a simple starter program was needed, to get boys involved at a younger age, one that would allow fathers to work with the boys and would invite younger boys to participate in the program. This led to the later concept of the first Conquest Junior Program.

Brian had a vision of making Conquest into an institutionalized youth program that could be spread across North America and beyond, to bring thousands of youth closer to Christ through fun, formation and apostolate. He offered all of his many struggles and sufferings with cancer for this vision. He did not live long enough to see it fulfilled, and was born into eternity on February 10, 1998 at the young age of 21. His father, Jack Bisgrove, picked up the torch and helped form a team to institutionalize Conquest and make it into a formal youth program that could be spread far and wide. The Conquest national team today believes that through all of Brian’s suffering that he offered up for the boys and dads of Conquest, bountiful graces are still being received today.

Brian wanted a quote placed on his funeral card, and it resounds exactly what every member of Conquest strives for: 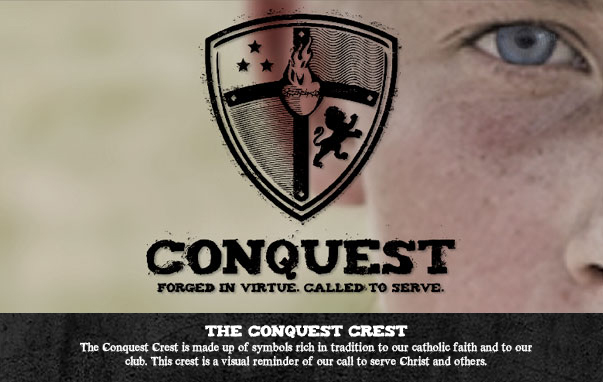 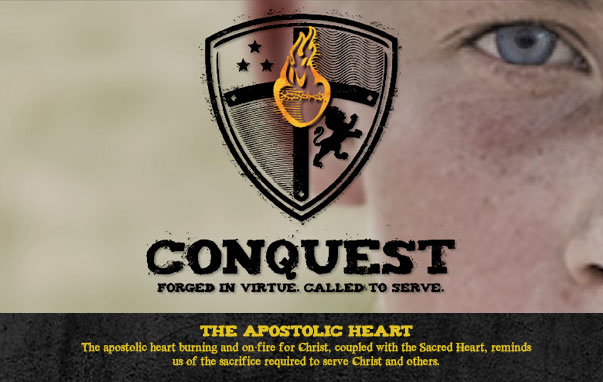 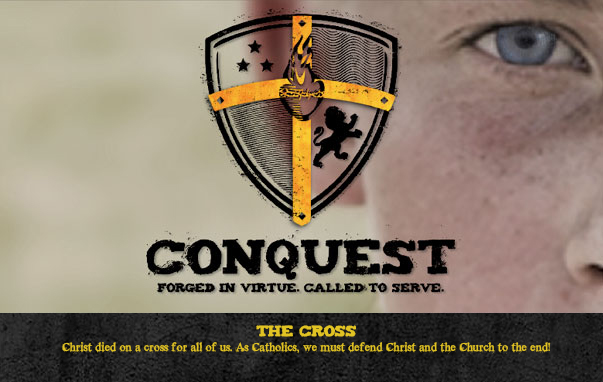 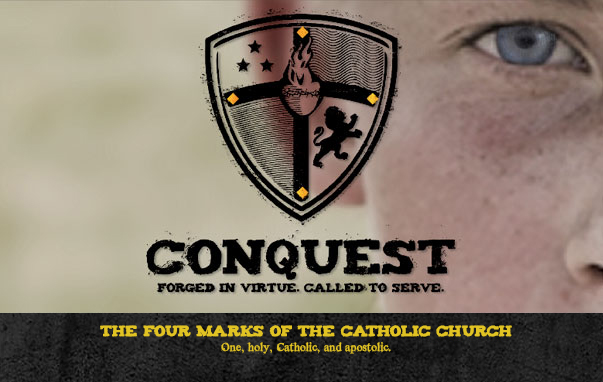 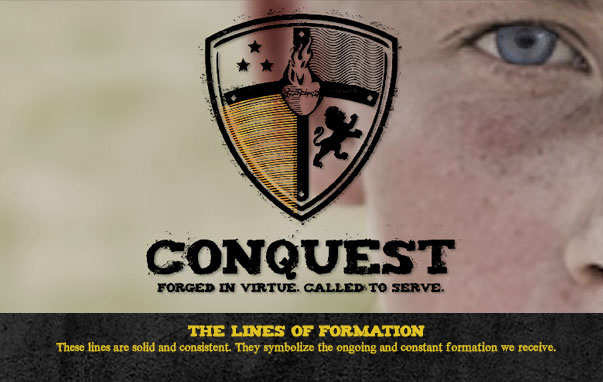 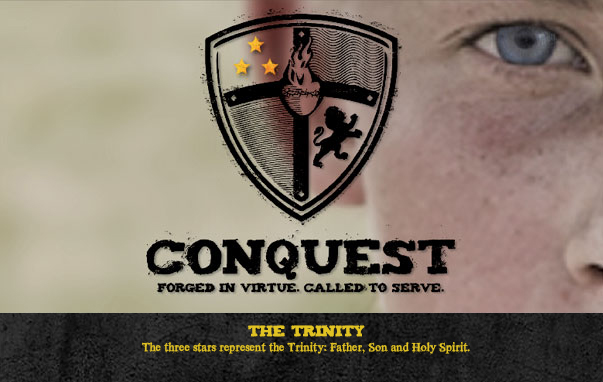 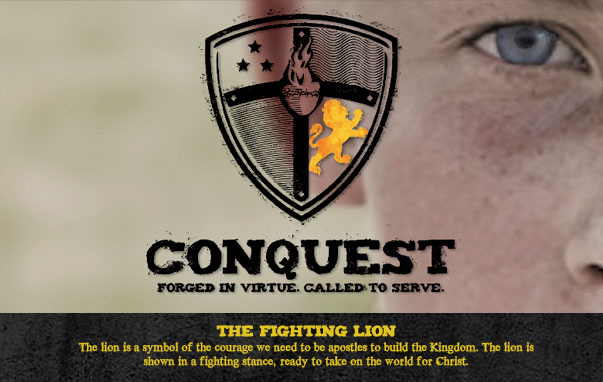 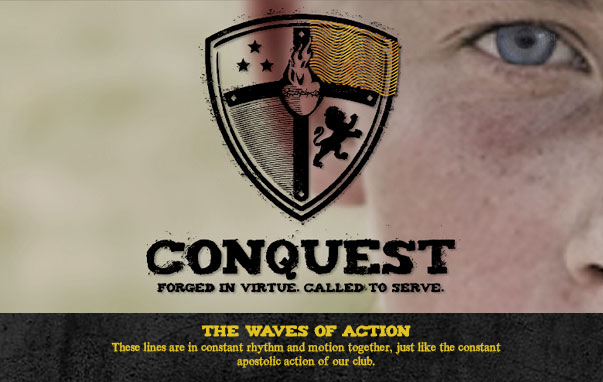 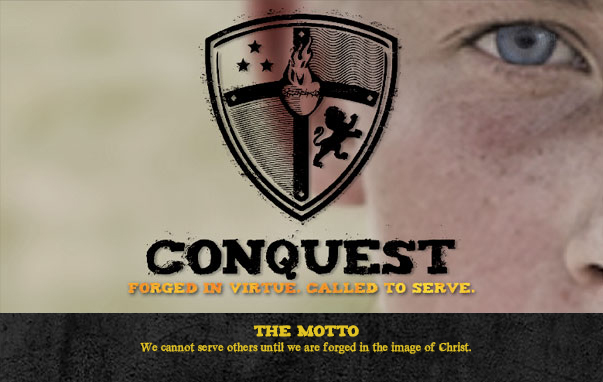 Our Conquest national team and staff are made up of professional, dedicated parents, volunteers, teachers, youth ministers, brothers and priests who want to help you be successful in your work to bring these boys/young men closer to Christ and willing to serve the world around them.

Conquest & Challenge offer parents, schools and parishes with methods, material, and training to help boys and girls grow in their faith and serve others. Our method combines different elements that together make our program unique and effective: Team Based and Teen Led; Service Driven, Virtue Centered; Age Specific; Flexible and ready to use; relevant and fun; 100% Catholic and gender specific. The materials and guidebooks are intuitive, but we also offer online training modules for adult leaders and team “teen” leaders.