Texas Conquest Weekend Camp Directors, clergy, staff, college counselors and high school jr. counselors hosted 27 middle school boys for a weekend of fun, friendship and faith. Friday evening started off with campers enjoying games and dinner with their dads who shared stories about themselves and their faith as they were growing up. Before the dads departed for the weekend, the group prayed together for the boys to experience a time away full of opportunities to draw closer to Christ. 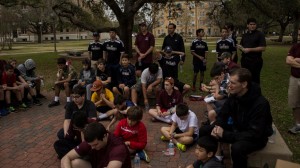 Saturday brought a full schedule beginning with an explanation of the main event, a Faith Survey. Following Mass, campers loaded up and bussed into College Station for a visit to Texas A&M University. After a picnic lunch, groups of 2-3 boys, along with a counselor, spread out around the campus to conduct Faith Surveys for anyone that would participate asking questions like: Who do you believe God is? How often to you attend church /Mass? Is the Eucharist Christ’s body /symbol? Do you believe in an afterlife? Is abortion right or wrong? Ever shared faith with a non-believer? At the end of each interview, the participant was asked if they had any intentions that the boys could prayer for in Adoration later in the evening. Surveys and prayer intentions were pinned to two six foot wooden crosses that were carried around the campus. After two hours, most groups weren’t ready to end their mission. 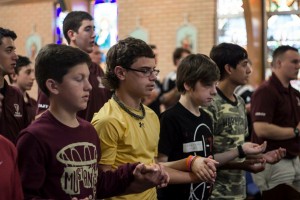 Campers were treated to a private tour of the newly remodeled Kyle Field and had fun running out of the players tunnel onto the field. After playing a few games, they loaded back up for the retreat center, tired and satisfied with the day’s work. Following dinner, groups gave a summary of the surveys and discussions they had with people on campus. During Adoration, the intentions collected that afternoon were passed around and the boys mercifully offered prayers for the people the met. Counselors prepared a Texas-sized bonfire outside where all of the intentions were burned during a quiet meditation time. 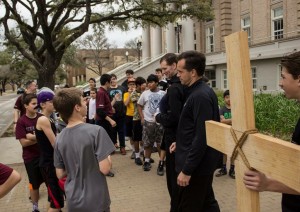 Sunday morning arrived and families reconvened for Mass, lunch and awards. Fr. Michael Sullivan recounted the weekend for parents during his homily and paralleled the Mass readings for the day with his observances of the boys’ “transfiguration” that occurred throughout the weekend: learning true fatherhood by the example of their own dads and spiritual Fathers, overcoming fear, rejection, disagreement and mockery to experience courage, affirmation, gratitude and prayerfulness while stepping out of the comfort zone during the Faith Surveys, and experiencing Christ up close and personal during Adoration. One camper described it as the most intense time of Adoration he had ever experienced. MISSION accomplished!!

Many thanks to our Event Directors Dr. Michael Kramr and Jonathan Nguyen, Assistant to the Directors Mark LeGros, the clergy Fr. Michael Sullivan and Fr. Daren Weisbrod and special visitors from the DC area Br Luke Rawicki and Br Domingo Fuenzalida, our tireless College Counselor staff, our newest staff of High School Junior Counselors, and our staff dads Greg Zanoff and Jose Rodriguez for manning the kitchen and feeding the boys and families. Thanks also to Mr. Craig Potts for the tour of Kyle Field, MidSouth Baking for the food donation, the RC ladies for delicious goodies, the Aggie Knights of Columbus for the use of the bar-b-que pit, and Holy Rosary Catholic Church for the retreat facilities.

Check out the Texas Conquest website for upcoming events: www.texasconquest.com